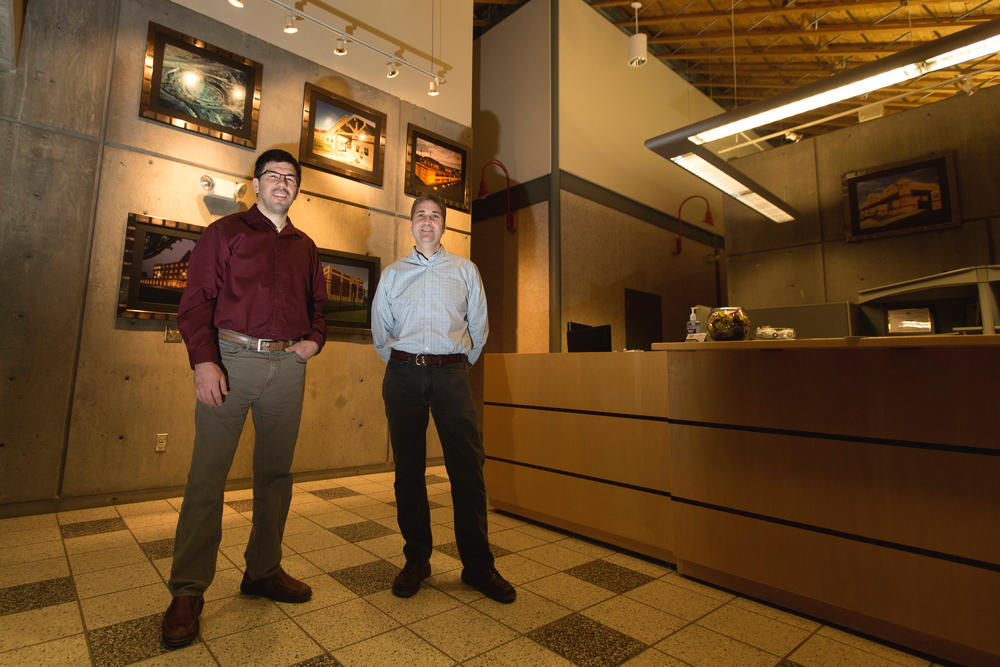 Scott Kringstad and Jeff Melgaard have had plenty of time to prepare for their new jobs.

The two longtime employees of Construction Engineers took over as owners of the Grand Forks-based firm at the beginning of the year, marking the completion of a 10-year transition plan they had with its founders, brothers John and Kurt Eickhof.

“These kind of events have to be planned. You can’t just flip a switch and change company ownership,” John Eickhof said. “We have two fantastic young men who are leading that company now.”

Kringstad and Melgaard, who are now president and vice president, respectively, of Construction Engineers, are leading a firm that has its fingerprints on commercial, public and industrial buildings all over the Grand Forks region, such as the East Grand Forks City Hall, office buildings and health care facilities, and the recent remodel of the UND School of Law.

The two new owners have been with the company for their entire professional careers—Kringstad for roughly 20 years, and Melgaard for 16—and have helped steer it through significant periods of growth after the 1997 Red River flood and the oil boom in western North Dakota. It now has five offices across North Dakota and another in Bemidji.

“They’re the guys who helped us build that company into what it is today,” John Eickhof said. The two founders still will have advisory and business development roles with the company.

The new owners, meanwhile, said they plan to continue the course laid out by the Eickhofs, whom they praised for having the foresight to implement a long-range transition plan that provides the firm stability through the change.

“This was an important step that John and Kurt took, and we appreciate that they did that for us,” Kringstad said.

Construction Engineers was founded 38 years ago and started with small remodeling projects—Eickhof remembers work on the storefront for the late clothier Sam Silverman as an early job.

But the firm gained a reputation over the years, Eickhof said, and saw a rush of projects in the aftermath of the Red River flood, such as school remodels and work on the Grand Forks water treatment plant.

Both Kringstad and Melgaard had experience in construction—Kringstad worked for a residential contractor in the Grafton, N.D., area as a teenager, and Melgaard, who grew up in Kenmare, N.D., worked at a lumberyard and on road projects before college. They both came to Construction Engineers around the time of the flood after graduating from North Dakota State University.

“We were a lot smaller company when I started,” Kringstad said. The firm has roughly tripled its employment since Kringstad started, he said.

“It gave us the time to prepare for this, learning all of the different business functions,” he said. “Over the last 10 years, we’ve been involved in the business functions, making the plans and setting our goals, preparing for the direction of the company that we all wanted it to go.”

“We’ve helped, along with a lot of other people in the company, shape the company’s direction, so I don’t anticipate any major changes,” Melgaard said.

Recent years have seen the company reach into western North Dakota as rapid oil and gas development spurred new construction projects. Its portfolio includes office buildings for oil companies Hess Corp. and Whiting Petroleum, but it also worked on several public projects in Watford City in the heart of North Dakota’s Oil Patch, such as an elementary school addition and law enforcement center.

But with dropping oil prices and state budget cuts, there may be fewer opportunities for construction projects in western North Dakota.

“We remain optimistic about it, but we’re realists, too,” Melgaard said. “We’ve got a steady backlog of work, so we’re just continuing to try to grow.”