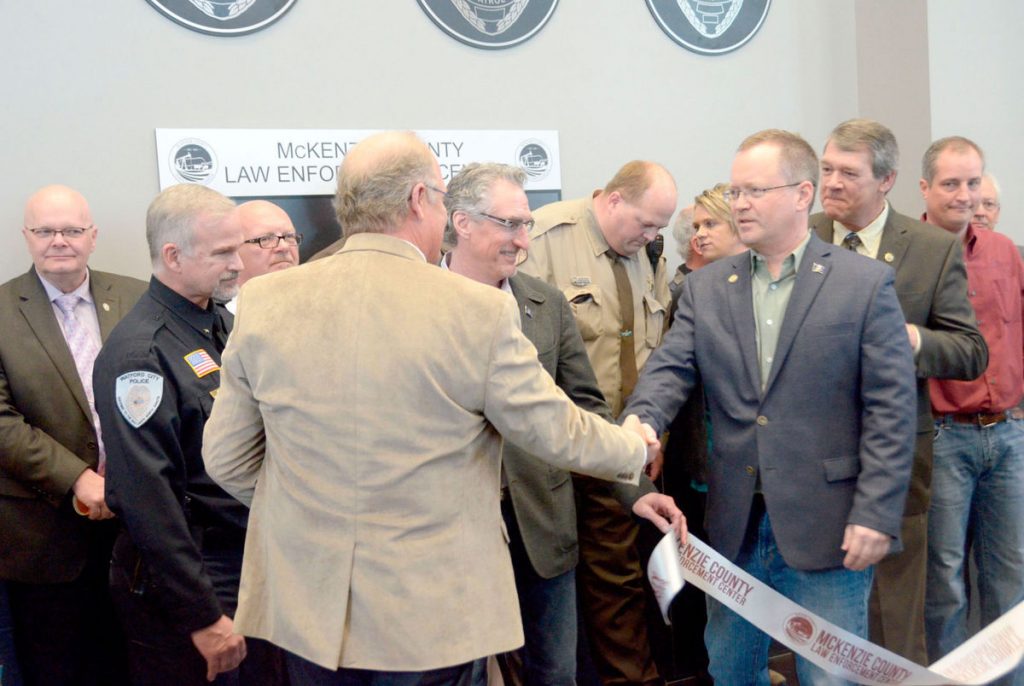 Gov. Doug Burgum, speaking at a ribbon cutting and dedication ceremony, praised the county and Watford City for the way it handled population growth.

“We all know the oil boom brought many things to North Dakota,” Burgum said, going on to list jobs, prosperity and an influx of new residents. “It also brought a lot of challenges to law enforcement, to the correctional system and to the judicial system.”

Doug Nordby, a McKenzie County commissioner, walked the crowd through the growth process and how the county arrived at the need for the law enforcement center.

In 2008, before the boom, there were about 20 sheriff’s office employees and three Watford City police officers. When the moving process is finished, about 25 Watford City officers and about 80 sheriff’s office employees will be working in the law enforcement center. There’s also space for the North Dakota Highway Patrol and two agents from the state’s Bureau of Criminal Investigation.

The project, which broke ground in 2015, was budgeted for $53 million but, Nordby told the crowd, the latest cost estimates are below that, at around $45 million.

The building is more than 94,000 square feet and in addition to the sheriff’s office, Watford City Police Department and state agencies, also houses the McKenzie County Correctional Facility.

The county’s old jail could only house 21 inmates, forcing sheriff’s deputies to house prisoners at facilities around the state. The new jail has 136 beds.

The need to house prisoners in other places costs as much as $100,000 per year in inmate transport costs alone, according to Burgum.

Getting the law enforcement center built took cooperation between elected officials from different boards, as well as from the public, Nordby said.

“I’d like to think our community does it better than any other,” he said.

Lt. Gov. Brent Sanford, who was mayor of Watford City until December, echoed Nordby about cooperation.

The law enforcement center is one piece of a larger puzzle, he said, one that adds up to a more livable, vibrant community.

“You need reasons why the families want to stay,” he said.

He pointed to the new high school in Watford City, as well as other building projects, as among those reasons.

Discussions between Watford City and McKenzie County led to the joint function of the law enforcement center, Sanford explained. Elected officials from the city and the county made a decision to take on the large project with the future in mind.

Attorney General Wayne Stenehjem said the community’s resolve in the face of challenges during the boom years showed its dedication.

The law enforcement center showed that the community was committed to protecting public safety, an essential component to quality of life, he said.

everyone in the region,” Stenehjem said.