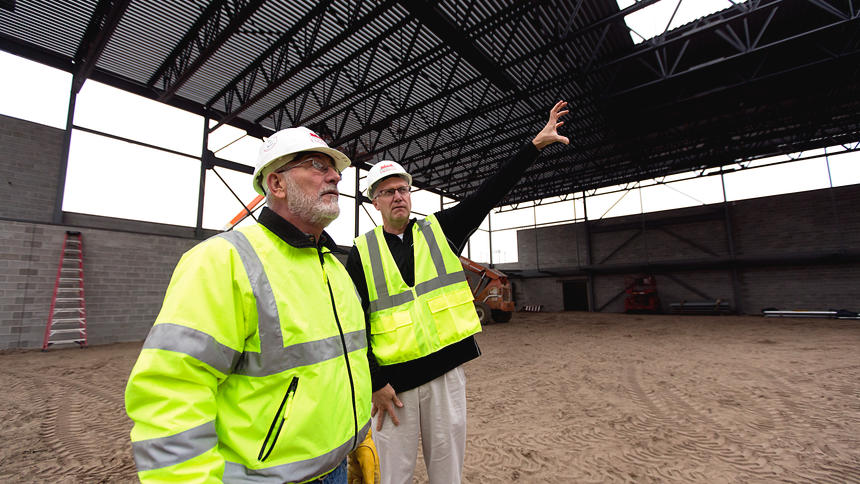 At East Grand Forks Senior High, the clanging and banging sounds of construction continue and students have to walk a little farther than usual because their new parking lot isn’t finished. But the sacrifices will pay off by next September, when Senior High plans to unveil its completed renovations.

“We understand it’s for the greater good,” Principal Brian Loer said last week. “In a year, we’ll be good to go.”

The voter-approved project includes two additions. The new space to the north will have locker rooms, a gym with a walking track above, two art rooms and new band and choir space. The west addition will have administrative space on the lower level and a STEM (science, technology, engineering and math) lab above.

According to Loer, increasing enrollment and the need to update the school’s old infrastructure prompted the project, which is estimated to cost $20.6 million. It’s the largest renovation ever for Senior High.

“To put it up to ADA (American Disabilities Act) code would’ve been quite a significant cost in the first place, so we wanted to do it right,” Loer said.

The new parking lot on the school’s north side, the status of which was uncertain in August, is about half complete. It’s only an extra 200 to 300 yards to the building, and some students choose to park on the street, closer to the accessible entrances. Loer said only three of the school’s six entrances are currently in use.

But aside from the noise and limited access to outside doors, Loer said the construction does not interfere with day-to-day school activities, and the whole project has been partitioned off with fences.

If the work continues on schedule, Loer said the new additions will be enclosed by the end of November to allow inside work to go on through the winter.