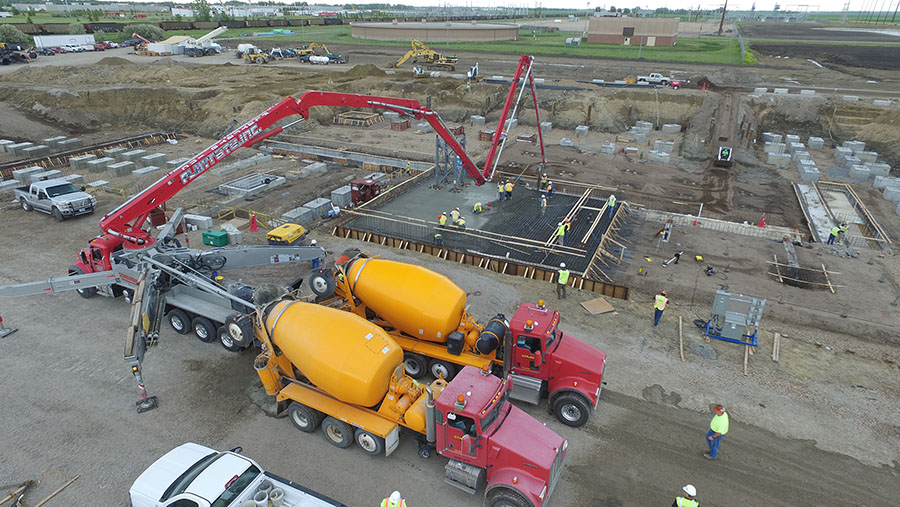 Grand Forks’ water treatment plant is still a hole in the ground. But with concrete pouring underway and a tower crane looming over the prairie, it’s getting easier to imagine what its 2020 launch date will look like.

The roughly $150 million project is south of DeMers Avenue and west of the Amtrak station at the edge of the city, and draws between 50 to 70 workers each day. On Thursday, excavators buried metal piles, workers built framework for the growing foundation, and a crane swung buckets of wet cement overhead, helping workers pour the hardened blocks capping metal piles that dotted the area.

“It’s really fast-paced,” Sherri Eddleblute, a project manager on the site. She described it as a well-oiled machine—constant work in all corners.

Over the next 12 months, Eddleblute said the concrete structure will begin to rise above the earth, with interior work beginning before the end of the year. The project should be “substantially complete” by late 2019 and come online in early 2020.

The plant will be funded with state and city dollars, though exact totals from each still aren’t clear. The state is poised to disburse the final chunk of $65 million in funding soon, but rising costs have led city leaders to hope for as much as $10 million more—and in a lagging economy, it’s still not certain if they’ll get it.

It’s not clear how the city will fund its own portion of the project. Water rates are expected to increase over the next six years to help pay for costs, but exactly how much higher water bills climb will depend on whether Grand Forks residents back a sales tax increase for local infrastructure. Water rates went up 9 percent for all customers last year, and a budget draft for 2018 has residential rates up 6 percent and others up 4 percent.

A sales tax vote is expected before the end of the year. What the proposal will look like still isn’t clear, but city leaders are starting a drafting process with the local Chamber’s recommendation: a 0.5 percent sales tax increase that lasts 20 years.

Those numbers have been adjusted downward out of political necessity. Voters rejected a 0.75 percent, 50-year increase at the polls in November.

City Council member Bret Weber took a tour of the facility on Thursday, and reiterated the need for that sales tax.

“It’s kind of an old song for me,” he said. “It isn’t just the people of Grand Forks who will be using this water. It’ll be visitors and others. A sales tax makes sure that all the users will be helping to pay for this—not just the residents of Grand Forks.”

And he added how happy he is to see work rolling ahead.

“It’s impressive what a large project it is, and that we’re already enjoying economic benefit from having this size of project taking place in the community,” he said.