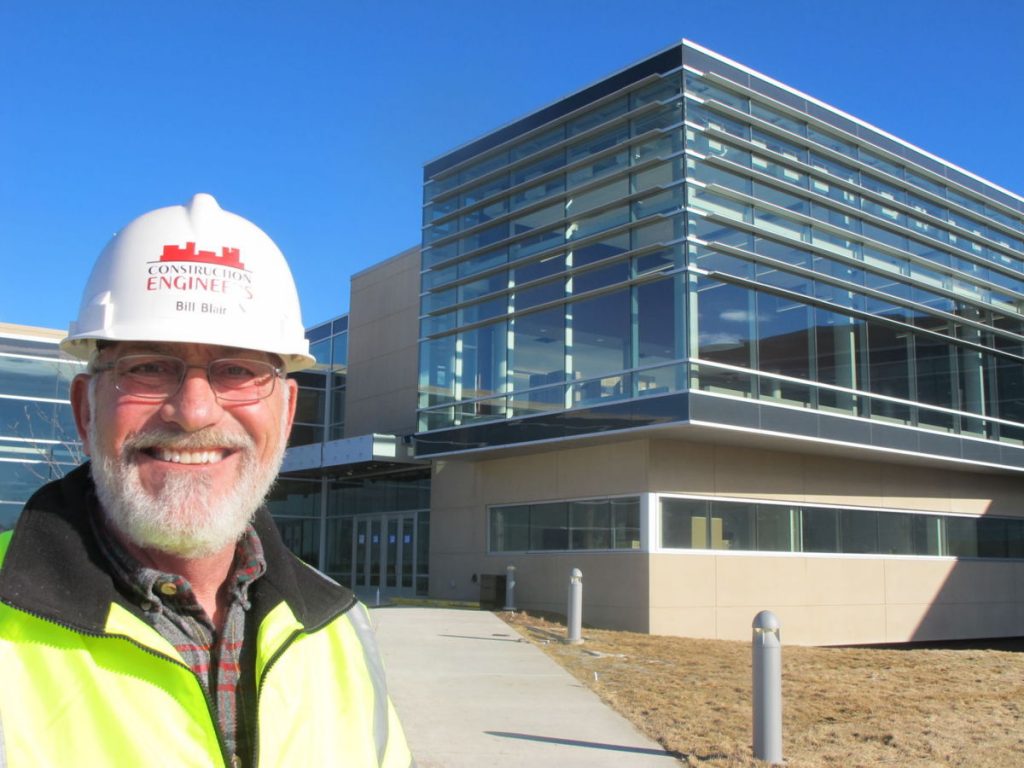 Bill Blair’s put his mind and construction know-how into a lot of buildings in his career, but he also put his heart into the new high school in Watford City.

The glass-and-steel structure rises as if from a futuristic dream in this oil boom town so changed it hardly recognizes itself.

The high school — designed with a wing that holds public spaces for arts and athletics and and another with classrooms, library and collaborative technology centers — is a symbol of all that’s waited for Watford City on the far side of hard times.

Blair, field manager for Construction Engineers, said that feeling was shared by everyone who worked on the project. His company is in a joint venture on the project with Kraus-Anderson.

“The people here deserve this. We’re building something the town needs. I haven’t felt that way before, that when the dust settles, there’s a real feeling of satisfaction for what’s been given back to the community,” he said.

The project is swarming with workers, who since the first day 15 months ago have worked seven days a week to meet a tight timeline.

“Everybody worked together under pressure, but there were always ‘good mornings,’ and smiles. We’re truly a team out here and all the subcontractors help each other, share equipment. We wouldn’t be where we are without that,” Blair said. “It’s an absolutely beautiful school; a concept that can last a long time.”

The builders always have been racing the clock and now the clock’s alarm is ticking.

At noon Feb. 15, the community will dedicate the school at a formal ceremony, with tours and speeches, and the new 1,400-capacity gym will be opened for the first time to host the championship District 15 girls’ basketball game.

The next day, about 500 students in grades seven through 12 will walk through the doors, find their classrooms and settle into a building as open to sunlight as young minds are to new ideas.

Superintendent Steve Holen said the new school means the district can shed most of the portable classrooms on campus. The district also will sell 14 single-wide trailers it brought in to provide affordable temporary housing for staff.

“There’ll be no trailers on the property and only a few portables. We’ll be back to a traditional school setting,” Holen said.

Though the high school remains an active construction site, what’s left to do is primarily the final finish work.

“There’s no Plan B. We’re going to be ready, and I’m not worried about that. It’s nice to be at this point, and we’re just waiting for the day we can let the kids in,” Holen said.

The $53 million school is designed so that integrated study areas, such as English and social studies, math and science, each share a level with open space for collaboration.

“This is about hands-on technology and cross-curricular integration,” Holen said. “We were already heading here in education, and this is an opportunity to build a building to match that. There are so many different things we can do and this will grow with us.”

The “old” high school will become an expanded elementary school for grades four through six. Plans are already on the board for a second elementary school so the former high school can become a middle school only, but for now, the focus is on the building that’s the symbol for the dynamic growth of a community and a region and the dedication Feb. 15.

“We’ll have one whole day of celebration,” Holen said.

The Watford City Events Center, a $50 million companion building on the high school grounds, is scheduled to be complete in September.