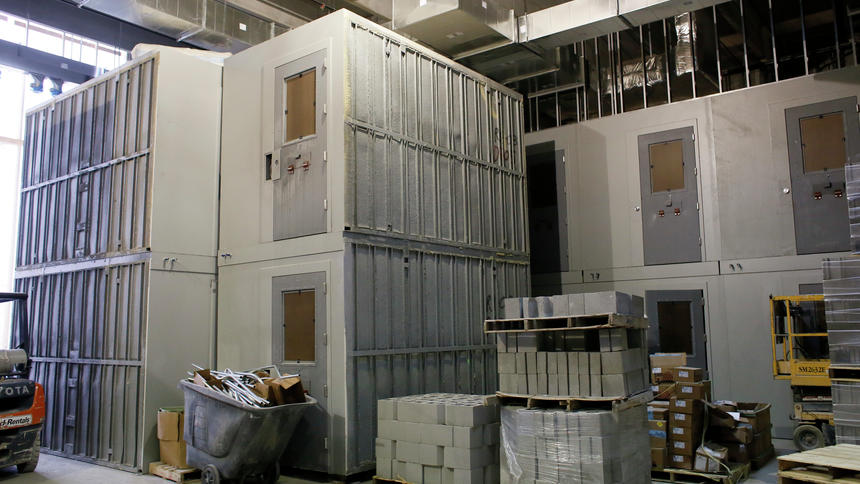 MOORHEAD — The first phase of the new Clay County Jail and a new Law Enforcement Center building in north Moorhead should be complete by the end of July, county officials said last week during a tour for members of the Moorhead Business Association.

The jail will be able to accept more than 200 prisoners once construction is finished, County Commissioner Kevin Campbell said. That capacity is expected to solve a chronic and expensive overcrowding problem for Clay County, which now transports 60 to 70 prisoners a day to and from other counties to be housed.

Campbell said the new jail will have room to take in inmates from other counties, which would bring in revenue for Clay County.

The first phase of the jail includes separate two-level cell blocks for medium- and maximum-security inmates, women inmates, and work-release inmates; a gymnasium; a drive-in sally port for prisoner drop-off and pick-up, an inmate-processing area, and a command center and other monitoring areas for jail officers, according to Nick Fiecke, project manager for Construction Engineering, which is in charge of the project.

“There’s over 200 cameras in this building, so there is nowhere to hide,” Fiecke said.

There is also a library and computer-access area for inmates to study to obtain a GED certificate or pursue higher education, Fiecke said.

The second phase of jail construction will include a laundry, kitchen and administrative area, and the removal of the old jail. That will begin after Labor Day, County Commissioner Jenny Mongeau said.

The land the old jail sits on will remain green space until the county decides to expand. Berg said plans allow for building two more 60-bed pods for inmates.

A big plus for the jail will be a behavioral health pod for inmates to get treatment for mental health issues, Mongeau said.

The county has also obtained a grant through Lakeland Mental Health Center to have two full-time mental health professionals on site to help inmates, Mongeau said. That should make it easier on prisoners and jail staff alike as prisoners will be able to get medications and treatment in a more timely manner, she said.

The new Law Enforcement Center (LEC) stands just north of the current LEC and County Courthouse complex. The county purchased and razed more than 20 houses to create room for the new facility.

The LEC will house the Clay County Sheriff’s Office and Moorhead Police Department. Clay County will own the building, and the police department will rent space.

Moorhead police Capt. Tory Jacobson said the new LEC will be more efficient, reflecting the close working relationships the agencies have forged. Jacobson said 40 percent of the work areas are shared between the two agencies.

“It really has become a perfect scenario for us,” Jacobson said.

A parking garage on the north end of the building can house about 30 vehicles, keeping their computers and other devices warm and ready for immediate use in all weather. The garage is reinforced so a 12,500-square-foot second story can be added for more office space.

The new evidence room is climate controlled with specialized air-handling systems, and has an entrance to allow in vehicles that are taken into evidence.

The main entrance will be on the east side of the building. It includes bullet-resistant panels for the reception desk.

The projects are expected to cost $52 million once fully completed. The bonded debt is being paid through a mix of financing that includes a half-cent sales tax; about $150,000 a year from a wind energy farm; lease payments from the city of Moorhead; and money available after other debt has been paid, Berg said. A brochure on the project says another $50,000 comes from a county levy that has been in place since 2014.