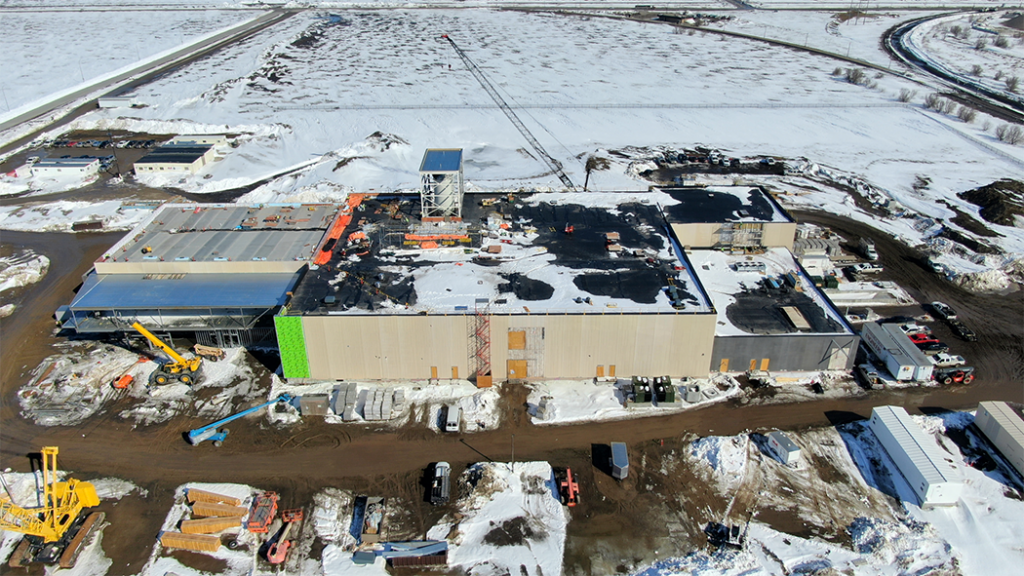 The city of Grand Forks is working on a game plan for redeveloping the site of its current water treatment plant, as the city plans to transition operations to a new site in 2020.

The nearly riverside lot at 503 S Fourth St. in Grand Forks has been home to a city water treatment plant since 1901, according to an insurance map drawn of the area that year. The current facility was built in 1956, with additions in 1968 and 1984.

Water Treatment Plant Supervisor Fred Goetz can identify the oldest parts of the plant by walls of green subway tile that were iconic to the late 1950s.

“When you see the green tiles, you know it’s the vintage ’56,” Goetz said. “You can kind of date the whole thing.”

Goetz has worked at the plant since the early 2000s, and he says he’ll miss the 63-year-old building and its character when it comes time to move.

“It’s going to be tough to leave. I really like it downtown,” Goetz said. “There’s just something about coming downtown to work. After the (1997) flood, things kind of slowed down a little bit downtown. But now with the new buildings and homes that are coming up, things are getting a little bit interesting again.”

The address also is significant for the unique view it offers of the intersection of the Red Lake and Red rivers, a geographic circumstance responsible for the “Grand Forks” name.

“I call it the million-dollar view. It’s very pretty, especially in the summer months when the trees are all budded out,” Goetz said.

Consultants agree. Urban Planner Cory Scott, who is helping develop a Downtown Action Plan the city can begin implementing during a reconstruction of DeMers Avenue this summer, is recommending the city build single-family housing there to take advantage of the view.

“What can we do to kind of elevate the area near the river, so that people who live along that area benefit from those views?” said Scott, who works for RDG Planning and Design.

However, Alex Reichert, who serves on the Planning and Zoning Commission, said earlier this month in a meeting he had “no interest” in approving the kind of residential development he saw in Scott’s proposals.

“If we’re going to expand downtown, I don’t want to just put some townhouses where the water treatment plant is,” Reichert has said. “I would like to see mixed use down there, I would like to see significant commercial, the sort of thing that can provide an opportunity to stretch downtown by a good six, eight, blocks by putting another anchor down there.”

City Administrator Todd Feland said the city wants to create an “extraordinary redevelopment” that will not only stand the test of time, but also the test of economic forecasting.

If the new water treatment plant on the west side of town is fully functional by mid-2020 as the city has predicted, Feland said the downtown plant will be demolished by the end of that year.

“I think between now and the end of 2020, we would look to refine the concept and have all our due diligence (done) as part of that project, from having the right concept to making sure it’s economically viable,” Feland said.

Redevelopment then could begin as soon as 2021.

Goetz said when staff move into the new water treatment plant they’ll likely bring some of the old equipment with them.

“We’re going to have a little museum with us at the new place,” he said.

Because of all of its additions in the last 63 years, Grand Forks Historic Preservation Coordinator Jeff Wencl said the current building is not eligible for the National Register of Historic Places.

“I think the water treatment plant is the kind of historic building that can be easily overlooked, in historic preservation,” Wencl said. “It’s not flashy, it’s not impressive architecturally. You have other buildings that are really iconic, like the Lyons Garage, or like the Metropolitan Opera House, or many of the other large, dominant buildings downtown.”

Still, Wencl said, the structure has a history that matters.

“It provided the water supply for the city as it’s grown over the last century,” he said. “Just because it’s not flashy and it doesn’t have architectural uniqueness doesn’t mean it’s not important to the history and development of Grand Forks.”

Though construction on the new plant didn’t begin until 2016, Goetz said the city has known since shortly after the 1997 flood it needed to move its water treatment plant away from the Red River.

“The ’97 flood really hurt this facility,” Goetz said. “It took a beating in ’97, (and) the equipment and things have definitely seen their life.”

The city built a clearwell at the new site on South 58th Street in 2001. A few years later, a sludge plant near the floodwall was removed, and since then the city has been transferring all of its waste to ponds in the east side of town. The city built a raw water intake center near Kannowski Park in 2004, which the city will continue to use even after the new plant is up and running.

“As it warms up and people start getting out in their yards, that’ll bump up to about 14 (million gallons),” Goetz said. “People want to get out and clean their house, water their lawn and all that good stuff.”

The new plant will process 20 million gallons of potable water daily, at maximum.

“With technology, like if you look back at like the ’70s, we’ve kind of maintained the same amount of water,” said Lead Water Plant Operator Eric Nelson. “When we built the water treatment plant we built it bigger, because the town is expanding rapidly. … (Water use) is going to go up with a lot of new houses and sprinkler systems.”

While conservation and low-flow technology will help keep citywide water use steady, Goetz added, new industries sprouting up across the city like the Red River Biorefinery also will increase need.