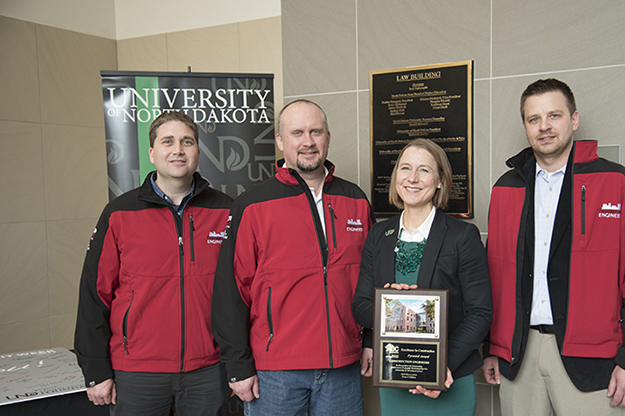 Dean Kathryn Rand says that the completion of a new addition and renovation to the School of Law building last year was the culmination of seven years of hard work and the realization of a dream come true.

On Thursday, Feb. 23, the dream continued to be even better as the Law School was recognized for its part in a regional design and construction award that was the result of the teamwork involved in completing the $14.4 million Law School project.

Representatives of Construction Engineers, Inc., which acted as construction manager for the project, took time to share the spotlight with Rand and the students, faculty and staff of the Law School, which helped the company win the Pyramid Award for Outstanding Renovation Project from the North Dakota/Minnesota Associated Builders and Contractors (ABC).

The award was given to Construction Engineers last month at the ABC chapter’s annual Excellence in Construction banquet.

“This is really such a wonderful recognition of what this building means to us,” said Rand, after accepting a recognition plaque. “Also, this is going to be a daily reminder of the value of teamwork and what can be accomplished when the need is there and the hard work is behind it.”

Rand continued by lauding the team effort, both on and off campus, involved in the Law School project.

“We have together made a difference for legal education and the legal profession in our state and in our region,” she said.  “We are so grateful for everyone — the state, our donors and all of the folks who lent their skills and their talents toward completing this building — it is a dream come true.”

Representatives from Construction Engineers and Law School faculty and students gathered to celebrate the award and recognition in the Law School Building’s Central Commons, part of the 16,000 square-foot addition to the original law school building.

Students filed in to sign a banner that thanked donors, friends and other stakeholders of the Law School for helping to make the addition and renovation a reality.

“It’s no exaggeration to say that this new and improved building is the single most important improvement to the law school in the last 50 years,” Rand said.

Even though the project represented about seven years of total effort, including planning and design phases, the actual construction spanned only one academic year. Keeping to that time frame was a very important part of the process, Rand said.

The construction and the renovation of the Law School forced students, staff and faculty to be spread across more than a dozen building on campus – certainly not an ideal situation for anyone involved, especially the law students.

Rand said that Law School administrators promised the American Bar Association that this displacement would only be for one academic year. She said it was a year in which the strength of “our community was tested” by being spread so far apart. But thanks to Construction Engineers and other project partners, the Law School was able to keep its promise to the bar association.

“Construction Engineers was presented with an extraordinarily daunting task — we needed to get this building done and we needed to get it done on budget and on time — and that is exactly what they did with spectacular results,” Rand said.

Nick Fiecke, a project manager for Construction Engineers, was on hand at the Law School on Thursday for the celebration. He said the award and recognition was made possible because of a strong team that included Rand, former UND Provost and Law School Dean Paul LeBel, students, staff, faculty and project partner, ICON Architectural Group

It’s always satisfying when you get presented with an award like this from your own peer group,” Fiecke said. “I think this award really goes to show what an owner, designer and contractor can accomplish when they set out for the same goal on a project … and when everyone’s on the same page.”