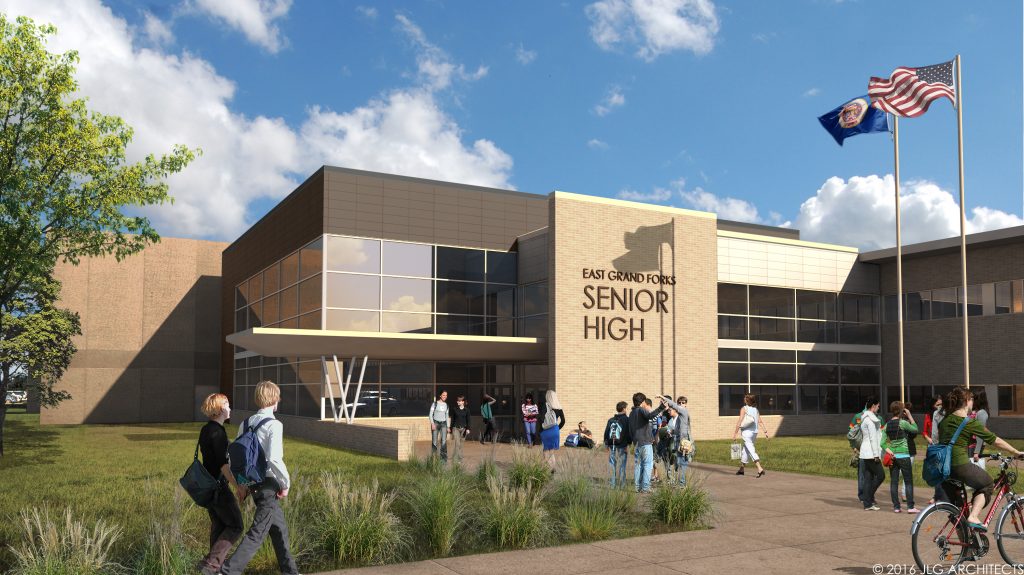 An expansion project at East Grand Forks Senior High School is on-schedule and about $8,000 under budget, project managers said.

Representatives from JLG Architects and Construction Engineers told the School Board Monday the design process was going smoothly. In November, East Grand Forks voters approved a $20.6 million bond proposal that adds an estimated 61,000 square feet to the high school.

The project adds a larger gym, a 2,500-square-foot career and technical shop and significant space for music and performance rooms, among other changes.

Minor adjustments to the school entryway and other locations, as well as the addition of a turning lane for fire department access, decreased the initial savings from $60,000 to $8,000, said Tom McDonald, senior project manager for Construction Engineers.

Fawn Behrens-Smith, project director at JLG, said the changes are so small, “you will probably never notice it.”

The School Board unanimously approved the project budget of $20,716,000, with Board Chairman Tony Palmiscno absent.

The project schedule also is going as planned, McDonald said.

Construction on the football field is expected to begin May and be finished by August, in time for the first soccer game, and work on the foundation is set to begin by mid-summer, he said.

Contractors also want the parking lot to be usable by this summer, which will help relieve congestion.

“It will still be congested, but we want to get that out of the way by this summer,” McDonald said.

The first of three bid packages could be finalized by the April 25 board meeting, he said. Construction work will affect all district students this fall, who will be starting the school year earlier to accommodate remodeling to Senior High’s second floor.

At the last board meeting, the School Board approved Aug. 22, before Labor Day, as the first day of school to provide five additional weeks of construction time. Minnesota districts normally start school after Labor Day.